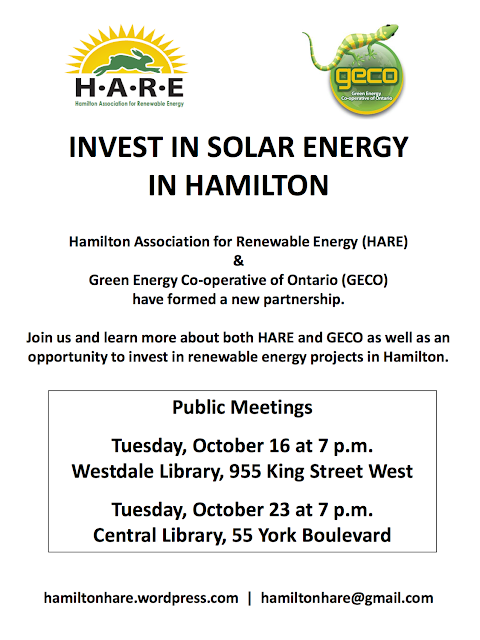 Posted by Beatrice at 08:22 No comments:

Learn marketing strategies, develop a sales pitch and attract members and investors to your renewable energy co-operative (including next steps to following up with interested but not yet committed individuals).
Monday, September 17th at the Royal Botanical Gardens (RBG)  7-9pm. Rooms 1 and 2.

The OPA has finally released FIT 2.0. and the opportunity for community power has never been better!
Hamilton Halton Energy Awareness Team (HHEAT) invites you to an engaging and fun workshop on tips and direction for generating sustained interest and new members as you move forward with your co-operative. A panel of marketing and sales experts will lead the workshop. These include:
Glen Marshall from Greening Marketing inc.
McMaster Innovation Park
www. greeningmarketing.ca

Posted by Beatrice at 06:30 No comments:

The final FIT Program Rules, Contract and other program documents have now been posted on the FIT Program website.
The application window for small FIT projects is anticipated to open on October 1, 2012, and remain open until November 30, 2012. If your FIT project is a small FIT project (typically 500 kW or smaller), then you must submit your electronic application form during the application window to be considered under the FIT 2.0 Program. The OPA anticipates awarding 200 MW of small FIT contracts.
The OPA recommends that you review the final versions of the program documents carefully to ensure you understand how the FIT Program has changed. In addition, there have been several revisions made to the draft version of the Rules as a result of feedback received.
In order to retain their original time stamp, those who had previously submitted a small FIT project application must submit a revised electronic application form during the small FIT application window, followed by a hard copy submission within five business days.

The city has given the go-ahead for solar panels to be installed on the central Hamilton building which houses its operations centre.

The city has signed an agreement with Horizon Energy Solutions to allow the company to install a 1,400-panel, 250-kilowatt solar power system on top of 330 Wentworth St. N., which is north of Barton Street East.

Horizon Energy is a local developer of renewable energy projects that is 79.9 per cent owned by the City of Hamilton. It will be a tenant of 330 Wentworth.

Horizon will pay rent to the city, which is expected to generate $250,000 over the course of 20 years. The city will also be paid dividends, but Horizon will not reveal its revenue projections for competitive reasons.

The project will use about 50,000 square feet on the building's 250,000-square-foot roof, said Tom Chessman, manager of energy initiatives for the City of Hamilton.

He said the panels will most likely be installed next spring.

The Wentworth site was chosen because of its location, structural stability, and how it is situated, said Horizon Energy vice-president Scott Knapman.

Horizon is responsible for the installation and operation of the panels.

“We install these systems and then the power we produce off them, we sell back to the Ontario Government under the Feed-in-Tariff program,” Knapman explained.

The Feed-in-Tariff program from Ontario Power Authority was introduced in 2009 by the Green Energy and Green Economy Act as a way to reduce coal-fired electricity and boost the renewable energy business.

Revenue from the Wentworth project rent will go to the energy reserve fund, which pays for salaries for the city's office of energy initiatives.

The office pursues projects and initiatives that save the city money on its energy costs, Chessman explained.

Posted by Beatrice at 12:09 No comments: On July 11th, 2012 the Minister of Energy directed the Ontario Power Authority to continue with and to make modifications to the Feed-in-Tariff ("FIT") Program.

Why is this directive so important for Renewable Energy Co-Operatives ("RE Co-Ops")?

RE Co-Ops are one of the primary beneficiaries of the directive.  The Minister directed that renewable energy projects that have a fifty percent (50%) ownership interest by a RE Co-Op where 50 or more members of the RE Co-Op are local property owners are first in line (with aboriginal groups) when allocating grid capacity.  With respect to remaining projects, a renewable energy project where fifteen (15) to fifty percent (50%) of the project is owned by a RE Co-Op and where 50 or more members of the RE Co-Op live in the municipality where the project is located get 3 priority points for grid access.  This is the most priority points for any category.  Amended FIT Rules incorporating the foregoing are expected to be issued any day. The 50 members referred to above becomes 35 for a Small FIT Project.

Why is Priority for Access to the Grid so important?

Because it appears there is not enough capacity on the grid to connect all projects seeking connections.
What will be the result of this development?
It can be expected that many other project developers who are not RE Co-Ops will be seeking to join forces with RE Co-Ops to secure grid access.

How will these developers be "joining forces" with RE Co-Ops?
They won't be forming a new corporation.  The RE Co-Op has to have a direct ownership interest in the project with the developer.  It can be expected that the RE Co-Op and developer will be entering into an agreement regarding how they will own and operate the project together.

Sounds great! Are there any issues?
There are several uncertainties that will have to be addressed, including: any issues arising out of the final FIT Rules and completing the projects within the time prescribed to validate FIT contracts

What's this about timing?
The FIT Rules provide that project proponents have a certain amount of time to build their projects to validate their contracts.  There are also key milestones that must be met at various points during project development.  In order for the project to proceed, the parties will have to:
enter into an agreement governing the terms and conditions of their relationship,
have the required equity and financing in place, and
have the prescribed 50 land owners from the local municipality as members of the RE Co-Op
This will take time.  The Financial Services Commission of Ontario ("FSCO") governs co-operatives.  These new FIT Rules will be new to FSCO as well.  It can be expected there will be a learning curve for them.

Where do we go from here?

Hopefully the new FIT Rules will provide further guidance.  The next several months will be both challenging and promising for the renewable energy sector.  Stay tuned for further developments.

Mr. Shewan is a partner with the law firm of Lerners LLP and the Practice Group Leader of their Business Law Group.  He may be reached at ishewan@lerners.ca or 519.640.6334.

Posted by Beatrice at 08:31 No comments:

Federation of Community Power Co-operatives (FCPC)  to solve Ontario’s green energy struggle
From the press release
Despite the best intentions, Ontario’s Feed-In tariff (FIT) program has resulted in contentious debates over energy in then province.  Community participation in projects was suggested as a solution but community power proponents have had limited success to date. A new Federation of Community Power Co-operatives intends to change all that under new FIT rules anticipated any day. By unifying the co-op sector under one umbrella and sharing resources, the Federation expects to support at least 100 MW of community-controlled projects by 2015.

Debates over land-use, energy prices and the impact of renewable energy have been a challenge for Ontario’s Green Energy Act and Feed-in-Tariff program. With these struggles at the forefront of green energy news, an innovation developed by Ontario citizens to engage more communities in renewable energy - the community power co-operative - has been overshadowed despite its increasing popularity.

“The FIT program has been controversial because people don’t feel they’re taking part in the current energy transition,” says Deb Doncaster, head of the Community Power Fund.  “Co-ops are attractive because every community can now have a direct economic stake in local projects, and thus in the program as a whole.”

Under the new rules of the Feed-in Tariff Program (“FIT 2.0”), community power co-operatives and aboriginal power projects are acknowledged as key to gaining wider support for green energy in Ontario. However, co-operatives have had limited success to date given the intense competition for FIT contracts and grid capacity in the province.

FIT 2.0 prioritises community projects through a “points” system and “set-aside” of 10% capacity for renewable energy projects that are majority owned by co-ops and aboriginal communities.

By forming a Federation, community power co-ops will have a common voice to negotiate with government and private developers. Co-ops will also work together and share their resources, tools and knowledge to help the sector meet its community power set-aside.

“In forming the Federation of Community Power Co-operatives, the sector is practicing one of its core principles, co-operation among co-operatives – a fitting development in this, the International Year of Co-operatives” says Peter Cameron of the Ontario Co-operative Association. The goal is to work collectively towards maximising the set-aside allocation, creating efficiencies and best practices and in the long run, putting community power on the map in a way we have seen in places like Denmark and Germany where citizens own up to 50% of all renewable energy generation.

Judith Lipp, Chair of the FCPC, says the Federation is eager to help other co-ops and proponents of renewable power, and encourages them to join the conversation. “Community power has a great future if we work together to make it happen,” she adds.

Posted by Beatrice at 08:45 No comments:

TREC's capacity-building templates, tools and workshops are designed for groups who have the internal capacity to self-organise, self-educate and move forward with their projects. TREC’s capacity building services help groups overcome very common, but challenging barriers and reduce the typical legal and consultant costs incurred in getting your co-op and project started. This includes templates for leases, legal agreements, business plans and financial models. TREC also offers workshops run by one of our staff to help you use our templates to their full potential.
Check it out:
http://www.trec.on.ca/services-resources/tools-and-templates

Toolkit:
http://www.trec.on.ca/services-resources/toolkit
Posted by Beatrice at 12:51 No comments:

The Hamilton Halton Energy Awareness Team (HHEAT) educates the people of Hamilton and Halton about renewable energy and the cooperative model; promoting community -owned projects in both these regions. HHEAT is a project of Environment Hamilton and the Halton Environmental Network.

Renewable Energy Co-operative for Hamilton.
What are we working for?
We are a group of Hamiltonians and we working on setting up a renewable energy co-operative in Hamilton!
Next meeting TBA at 7pm. Hamilton Public Library, 55 York Blvd, Hamilton. Agenda to be posted.
All welcome!
http://hamiltonhare.wordpress.com/
Contact:hamiltonhare@gmail.com

Please contact the Hamilton Association for Renewable Energy (HARE) at hamiltonhare@gmail.com or call 905 549 0900 and ask for Beatrice.

What is Community Power (CP)?

Community power means renewable energy projects developed by and owned by landowners and individuals, solely and together.

Our HHEAT Workshops and other Resources

Guides to setting up a co-operative in Ontario

Renewable Energy Co-ops Around the World